We awoke to a overcast day. Boy, were we ever thankful. It rained last night so the temp dropped. As we were coming in yesterday, I saw a signed for the city of Metropolis, IL. Now any of you comics people know that is where Superman lived. (I am a Marvels comics kind of girl.) So we drove back there to check it out. It was a cute little down that is big on Superman. The owner of the museum is a former Cally person from the LA Area. His father got him started on his love affair with a Superman lunch box. He now has over 70,000+ items. Yep buddy you need a museum. It was very interesting. He also had Wonder Woman items and our daughter Relle is BIG on Wonder Woman. Granddaughter K started a conversation with the clerk about it and we found Relle a WW belt buckle. Now lets see if it gives her strength when dealing with her middle school students.

Lo decided he was not going to get the tow bar fixed. So, we both drove to Camping World in Nashville, TN. By the time I got there everything was back on the Hilton and we are ready to roll. Well, Camping World is just down the street from the Grand Ole Opry/Opryland Hotel. So we just had to spent time there. It is as beautiful as ever. Only K wanted to go in with me. We had fun looking at all the sites. The revolving door had a plant that included a guitar. There were guitars everywhere. The atrium was beautiful decorated and a place where everyone wants to stay. We met the magic act that was performing that night. One of the ladies was from Dublin, CA. Funny how Cally people can draw each other out. They asked K to help them show the crowd what they were going to do. K was happy to participate. There was a beautiful hand blown creation. If you are ever in Nashville put this beautiful place on your to see list.

We rolled through a tiny bit of Alabama, then on to Chattanooga, TN. Talk about commute time. We came to a standstill. This reminds me of home. We ended the day in Calhoun, GA. We actually found a great place to get take out Chinese food. Peng’s Pavilion. Yelp strikes again. We cooled our jets at the local Walmart. You never know who you will meet. We met a couple from Cally who was a former CHIP. You know he and Lo shot the breeze about traveling and rigs. 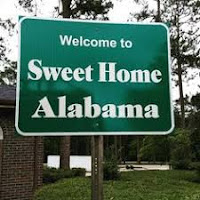