FROM THE OUTER BANKS

We traveled to the Outer Banks (OBX) of North Carolina. When we used to visit Lorenzo’s brother Monroe in Chesapeake, Virginia, we use to always see signs that said visit Nags Head everywhere. We were told it was a resort town. We thought, nah, this was not for us. On our trip this time we said, remember those signs we used to see about Nags Head? Let's go. So we put it on the trip schedule. Cairy and Charlene had spent their anniversary there and gave us great tips on where to go and what to see.

We looked online and found out there are 4 national parks on the OBX. Talk about a deal. The average RV sites are $70 a night. The national parks are $20 a night and if you are old geezers like us it is only $10 a night with our National Parks Senior card. Hey, Hey, Hey. It pays to get old. Woot! Woot!

It was a beautiful drive through the rain and all. We crossed to the Cape Hatteras National Seashore. We arrive late in the day and got our site and took off to the lighthouse. We caught the rangers talk about the Cape Hatteras. It is the second tallest brick lighthouse in the world. It was built in 1870. It is 208 feet tall. The lighthouse had to be moved from the old spot because of beach erosion. It took 10 years and a lot of bureaucracy crap before the lighthouse was moved. It took 23 days to move it. It was like moving 2 space shuttles. 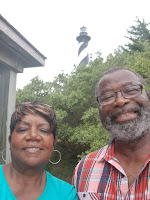 Cape Hatteras is a climbing lighthouse. Of course I wanted to climb it. Lo, well less just say he did not bother. There are 269 spiral steps. I am used to getting my 12,000 steps in but boy this was a challenge. I met a Jersey guy. We both huffed and puffed up those stairs. The good thing is there are stopping spots and you can look out the slit windows. It gives one just enough breathers to move to the next level. We final made it to the top. The view is amazing.  I was talking to ranger Katie. Guess what. She is a Cally girl from Pleasanton. She is here because her husband is a ranger also and they were transferred here. Yeah for the Cally girls. 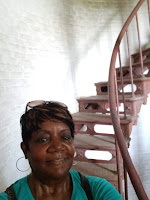 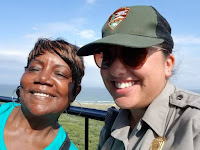 The ranger was tell us about how the Coast Guard wants lighthouses to be decommission. This lighthouse is protecting one of the most treacherous stretches of the Outer Banks, with a beam of light that spans 20 miles into the ocean. The area is so bad it is called the Graveyard of the Atlantic. Since 1526 more than 5,000 ships have gone down. They want to decommission the lighthouses for what???

We jump in the car and headed to town. Well I would not call it a town. I did stop at the Regina Hotel to get those brochures you know you always see in the lobby. The owner and her husband were really nice. She gave me lots of brochures and told us to go to Oracoke on Friday. Saturdays are supposed to be a zoo. There is a free ferry. We thank her and go back to the Hilton for a restful night.

On Friday we get up and head to Oracoke Island. It is Sunny but a little windy. We get on the ferry and meet a wonderful couple LaTonya and Vincent. They are having a little away time since their last kid just graduated high school. Yep it has been a while but we know how that goes.

We got our bike out since this is the easiest to get around on. The streets are narrow and there is no walkway to speak of. We started our sightseeing at the Preservation Museum. This house is just how the fishermen/navy man would have left it in the late 1800’s. They have a real log book from the lighthouse.

While waiting for our marine talk at the Visitors Center, we went to visit the graves of the English ships that were lost in WWII. Did you know that German U boat were bombing ships right outside the OBX area? The grave sites tell the story.

Did you know that sea turtles have out lived dinosaurs? Did you know sea turtles shells are like fingernails that is made from cartilage?  Sea turtles have a backbone and ribs. There is a coating on the shell that is called scope. They have strong muscles and a aerodynamic shell which is why they can swim all day. They use their feet like flippers. They also have a good sense of smell and see really well underwater. They can weigh up to a ton.  Now when they are out of the water it is a totally different story. They can barely walk with those flippers. They have blurry eye sight. They lay their eggs at night time so their predators do not see them and they won’t over heat. They dig a 2 foot hole that is shaped like a light bulb. They can lay 125 eggs the size of a ping pong ball. Mom covers the hole and head back to the sea. Now the bad thing is the mom waddles back to the sea with those flippers which leaves prints. A good predator will just follow the prints to the babies and suck them out. Some volunteer groups have been watching for the mom to leave and they get a leaf and cover up moms tracks. Mom never comes back so she does not get to know her kids. Knowing some kids this may not be a bad thing. Just kidding!!! 60 days later the eggs hatch. Now these babies are pretty smart they use each other as a ladder to get out of the hole. Boy some people could really use this lesson. It is call help me I help you. Did you know if they try to get out of the hole and it is hot they will just wait until night to go to the sea. Smart kids. They will look for the moonlight to leave. That is why some seashore will have turtle crossings. Did you know that only 1 in 1,000 turtles will survive? The female only lay eggs every 3 years. Unlike fish they don’t have to return home to spawn. Turtles have no teeth. Ok you can see I was very interested in this turtle talk. Sounds like a children’s church story coming for Uncle Barry.

We continued riding our bikes through the village. We went to the Oracoke Lighthouse and the Blackbeard Hole Museum. Did you know that Blackbeard, whose real name was Edward Teach, was reported to come from a wealthy family? How many pirates could read or write or strategize like Blackbeard? Ok we are not talking the Johnny Depp version. But, even Blackbeard got his due. He was finally out witted by Lt Maynard. Blackbeard was shot 20 times before he died. They swung his head from their ship.

It was getting late so we decided to return to the ferry to head home. We stopped to see the wild horses that live on the island. The horses were brought by the Spanish in the 1500’s. The island use to be overrun with horses so they have limited them to only 67. Better hope you are not #68 or you will be out of there.

Sooooooo. We just miss the ferry and had to wait 45 minutes for the next one. That was ok except that made us first in line. OK. I was not a happy camper. Now ya’ll know I love cruising, boating, jet skiing, parasailing and snorkeling (as long as Maggie is there with me). But for our car to be on the ferry on the very front. Needless to say I was freaking out. All I could think about was the cars behind us was going to push our car off the ferry. The front of the ferry only has a PLASTIC FENCE. The boat guys kept saying pull forward. I kept screaming we have gone far enough. Lo was looking at me and saying I got to move forward as the guys want. I was covering my eyes, looking anywhere but forward. He asks if I want to get out of the car and go to the upper area. Are you kidding me???? Get out of the car? I was already crazy and he wants me to get out of the car.  People were walking around like nothing was going on. Then it started to rain and the ocean got rough. Believe me when I tell you I was having a panic attack.  I guess I have watched too many action flicks about ferries. That was the worst 45 mins of my life!!!! Ferries are ok if you are in the middle. I could not wait for the shore to appear. I almost wanted to get out and kiss the ground. Whew, that was over.