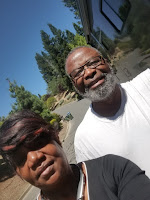 Well the Brandy’s are on the road again. Yahooooooo. We had so many graduations this year. We finally got out of the house on Friday June 7. Had a great drive through I-80 to I-505 to I-5. Can you believe that Shasta Lake was actually full like it was in the “old days?” Crossing that bridge brought back memories. We spent our first night in Yreka. Yep. That is almost the last stop before you hit Oregon. Of course we parked the Hilton 4 (for those who don’t know that is the name of our RV) in our famous Walmart Hotel. 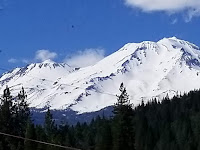 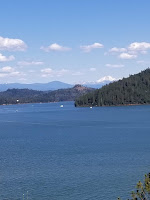 We awake to a beautiful Sabbath day. We journeyed on to Oregon. We have friends who just moved to Winchester Oregon in March. Since we had several invites from Frank, we decided we needed to stop and see them. We had a wonderful time with Linda & Frank Graves. Their daughter, Jesse Ann, just graduated that day from high school. OK, girls, daughter Corey has a room you would love to stay in. It looks like it is dedicated to the Disney Princess. We enjoyed the time we spent with them. We left there to stay at our Walmart Hotel. If you haven’t guessed it yet, we spend as many nights at our Walmart Hotel as possible if we are not staying in a city.

We got up to a sunny day and ventured on up I-5. Lorenzo found out his Old Geezer brother “Crazy Jim” was in Oregon visiting his mom. So, we decided to stop and see him. While going up a incline the stop coach and stop engine lights came on. I am looking at Lo and going, what the heck??? You just worked on everything before we left. So we stopped along the freeway. Lo got out and checked everything out and he could find nothing. Well, just so happens we had planned to spend the night at the service center of the factory where we bought the coach in Coburg, OR. Yep it is full hook ups and it is free. Yahooo the Lord is good. While waiting for Jim and his family to go to a ballet recital we decided to take a trip to Tillamook. You know the cheese factory. I have always wanted to go there and said since we are in Oregon why not. This is an amazing place. They have a brand new cheese museum. We had a great time. They give you a sample of all the cheese they make. They have a store that sells all of their items. Did you know they make milk, cream cheese, sour cream? I have never seen any of this stuff at the stores I shop in. It must be under the store label. The food in the snack bar was great and you got a lot for your money. 3 people can eat off the fries alone. 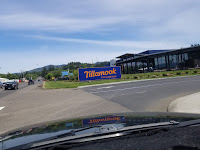 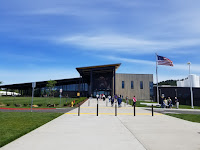 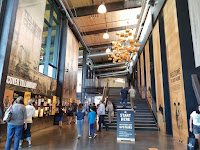 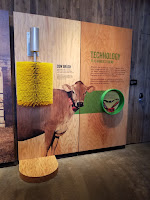 Did you know that the Oregon coast has a Tsunami Watch??? I could not believe the signs. So I had to ask what was that all about.

We journeyed, back to go to Joy Shearers house. This is Crazy Jim’s aunt. I have known Joy since I came to Pleasant Hill in 1978. She was my son’s Pathfinder leader. I remember stopping on Taylor Blvd because our son, John, saw a raccoon that someone had hit. Our son was adamant that we pick it up and take to Joy because she could stuff it and put in her museum. We did as he requested. She put it in her animal freezer so it could be stuffed. It was so good to see her. She lost her husband Gene last year. I will always remember him as the guy who made the flattest pancakes in the world. Joy has a great view of Mt. Hood out of the back of her house. It was so peaceful. She said she and Gene purposely built there house facing this way so they could see it all the time. It was good to see Jim’s mom Ramona, Shelbi and her boyfriend Eric, old and new family members. The little ballet girl was so cute. All she wanted to talk about was her hair that had been curled. The kids also had captured chipmunks at Joy’s house. I am surprised they even made it the way the kids were handling them. However, the dad got involve and he was feeding them every couple of hours. It was good to see a father participating with his little kids. We left there and returned to the Hilton 4.

Well. We got up to a great day. Lo had the service center look over the Hilton. We got the crunchy noise that has been bugging me every time we pull the Hilton’s bed out looked at. It just needed a lube. Lo knew this. He just couldn’t get to the area. The service center referred us to the Freightliner company down the street since they don’t handle engine stuff. I stayed at the service center since they had nice comfortable couches, TV and internet. Lo went there and found out the turbo was going out so that is why we got those messages to stop the coach. Again. Praise the Lord. We could have gotten further down the road and have to be towed to a service center. I got to know Troy, Janet and the other office people at the service center real well. They are such kind people. Troy kept us laughing. There were several people I met because they were having work done on their coaches also. We would swap stories of our journeys. Got info of where to take and not take trips. It was like a little village. It really made the week go by. We finally got the Hilton fixed on Thursday. Since it was late we decided to stay one more night.

We bid-a-do to the service center staff and RV friends and headed out. We drove along the Columbia River on the Oregon side. It is beautiful county. We got a close up view of Mt. Hood. We crossed over into WA and pull in the Walmart in Pasco for the night.

On Sabbath, we drove on Hwy 97 heading to Canada. However, I was looking on the map and saw Leavenworth, WA which was only 4 miles from our turn off. I read about this city in a romance book called Trading Places by Debbie Macomber. You know we like to plan nothing so we can go to places like this. We took off and had fun for the day. It is a cute Bavarian town. I can imagine what it looks like at Xmas time. There was an international car show in town. The town was swamped with 20-30 year olds showing off their cars. There was as many dogs in the town as people. Some dogs even had little booties to keep their paws from burning. They have a Nutcracker Museum. Oh my. They had 1,000’s of Nutcrackers. They even have a video that takes you back to the first nutcracker ever built. Now ya’ll know I was in “hog heaven” at this museum. Most know I am a nutcracker-a-holic. I love showing them off at Xmas.  What was only going to be a 2 hour stay wound up being all day. Just so happens the parking lot where we left the Hilton allowed you to stay one night for free. Oh yeah. That was right down our alley.

So this catches you up to our trip!

We traveled on to San Antonio to the Hard Rock Café. Unfortunately, no Midwest café will have the special spin pin. It was still good to see the city.

On to family friends in Harper which is outside Fredericksburg, TX. It was good to be with Mary Jane & Myron Tait. On our first day there Mary Jane gave us a tour of the city of Harper. The next day we got a chance to tour the Presidential LBJ Ranch & State Park. Lyndon Baines Johnson was the 36th president of the USA. He began his presidency after President John F. Kennedy was assassinated. Almost anyone who was alive in the 60’s remembers where they were and what you were doing when you heard he was killed. I was in a 9th grade history class. My teacher Mr. Stoer got a message that an announcement would be made. When it came over the loud speaker he started to cry along with us. Yep that was a day to remember.

There is a house at the state park that belong to the Johnson's neighbors. It represent what the area in homes in the 1900 looked like. There are docents that provide great information on the area.

Ø  He was known all over the world as just LBJ.
Ø  He was born in 1908 near Johnson City, TX.
Ø  He was the first of 5 kids.
Ø  His family was in ranching and politics.
Ø  His dad drove cattle on the Chisholm Trail.
Ø  He graduated from high school when he was 15 years old.
Ø  He got a BS degree and a teaching certificate.
Ø  In order pay for his education, he taught school for disadvantaged Mexican-American students in South Texas.
Ø  Looking at the effect of poverty and discrimination of his students made a deep impression that sparked a lifelong desire to find solutions for these issues.
Ø  Married Claudia Taylor (childhood nicknamed: Lady Bird) in 1934.
Ø  Elected to House of Representatives in 1937.
Ø  First member of Congress to serve active duty in WWII.
Ø  Elected U.S. Senator in 1948.
Ø  In 1953 he became the youngest person to serve as minority leader.
Ø  His ability to work with the President Eisenhower made him powerful leader.
Ø  Had a severe heart attack in 1953.
Ø  He declared War on Poverty.
Ø  He wanted new reforms call the “Great Society.”
Ø  Help to create Medicare and Medicaid programs.
Ø  He was a big proponate of clean environment.
Ø  Attacked discrimination by signing the Civil Rights Act of 1964 and Voting Right Act of 1965.
Ø  He nominated Thurgood Marshall as the first African American to serve on Supreme Court in 1967.
Ø  Some think his presidency was a failure due to the Vietnam War.
Ø  He chose not to run a second term.

We went to visit his actual ranch house but were turned away due to structural issues on the second floor. We were able to tour the grounds. He called his ranch the Texas White House. He had his cabinet members come and have meeting under the big tree. He spent 490 days on his ranch during his presidency.

The Johnson's are still very much revered in Texas.

We traveled back to Frederickburg to tour the quaint town. We had lunch in the Creamery shop. My sister Nita would love the bathroom. It has every kind of out door bathroom pictures. We also went to see the bats that come out at night. We had a great talk about the bats, but we only got to see 5 come out.

Well, campers until next time.