Where is all the heat??? Up north it feels like a winter day in SF. I  guess Montreal is not going to get the heat this summer. Well today we are heading south to the states. Yahoo. This mean we will have phone service and real internet any time we want.

We left Longueuil, CN and went over the Pont Champlain Bridge and entered into Montreal one last time and headed west.

We entered into the Province of Ontario later in the day.

We decided to killed time by finding old barns that were falling down and on there last leg. Some were so bad we could not understand how they were standing up.

We traveled 600 + miles to get to the US border. We were so happy to see that International Bridge. It was going home.

The US flag was flying high and we were loving it.

The border was a joy to see.

Yeah....... The Michigan sign almost brought tears. OK you know you have been gone to long with a state sign does this to you.

We moved the Hilton to the Straits State Park and got settled. Do you know Michigan has this rue that if you stay in a stay park you have to a "recreation passport". This is a permit that cost $9 a day or $30 annual. This is a way they raise fund for parks. if you are a MI resident it only cost you $11 for the permit. Since we are only staying 2 days we pay the daily.

At the end of the state park there is a beautiful view of the Mackinac Bridge.

As we are out touring the town we see a sign that really fits the van. It really was a Redneck van.

We decided we would check out the ferries that are available since we plan to spend tomorrow on the Mackinac Island. The State Line Ferry reminds us of the Brinley's  jets ski with the plumes.


We take a walk on the boardwalk in St Ignace. The water is amazingly clear. Another lighthouse to add to honor.

There is lots of history of the boats in the area. The harbor was lovely. May make you want to buy a boat. NOT!!!

There was a sign dial in a park dedicated to the boats. Lo tried it out. It really worked.

This is an odd statue. But it was dedicated to all the fishermen who of Mackinac County who lost their lives while commercial fishing. Most were under 40 years old.


·         The Great Lakes are known for the delicious freshwater fish.
·         Before the white man came, Native Indians tribes supplied their needs with fresh and dried fish from the lakes
·         Latter. others joined in the fishing business, many of them from the Scandinavian counties.
·         in 1800's sailing ships transported hundred of barrels of salted fish  from St. Helena Island to Chicago & Detroit.
·         In the 2000's commercial fishing is still done by mostly Native American fishermen.


We went to Castle Rock. Ok. this is hokey, but they had a cute gift shop. We only stop because we saw people on top of the rock.

We traveled on to the Bridge View Park. This gave us a beautiful view of the Mackinac Bridge. The suspension is actually longer than the Golden Gate.

When we crossed the bridge we were in Mackinac City. Since our friends Mary Jane & Myron Tait were just here days ago, we emailed them on what to see. We got great ideas from them.

We went to the Old Mackinac Point Lighthouse.  This lighthouse was built because the lighthouse at McGulpin's Point was not visible from all directions. It also included a steam powered fig horn.

While I was checking the lighthouse out Lo found a bench and struck up a conversation with a local lady who also gave ideas of things we could do in the area.

We went to the fort of Colonial Michilimackinac, but decided just to go to the gift shop that was part of the museum. (Personally, I am worn out about the War of 1812) I did learn many things about the fur trade in the 1700' and about the Native Indians.

Since the day had warmed up, many people were taking  advantage of the warm lake waters at the foot of the bridge.


We ventured 2 miles to the McGulpin Point. This is the site of the original lighthouse. We toured the home and I decided to go to the tower. The steps were narrow and small but the view was worth it. I could see why this lighthouse was not effective.

There was a little door you had to go through for the cat walk. There is finally an advantage of being short. No problem for me to go through.


When we left Lo decided he wanted to see where the road ended. So we followed the road until it came to the beach. I am like, Dude you are not driving Connie any further time to turn around.

As he did we met this couple John & Brenda.  He took our picture. John told us his uncle Meryl used to be one of the ferry captains when John was a boy. He also told us about places to go. He also invited us to have a drink since he and Brenda came to the beach to enjoy the scenery. We of course declined and to them to have a great day.

OK you know my pension for quirky signs. Here is one.

Decided to head back across the bridge and get something for dinner. Since we saw signs for the Kaswadin casino we decided to find it.  My sister Rita told me that the casino by her house served great food so we were hoping this one would also. No luck. If you wanted seafood it would have been lovely. But as a veggie. No luck. But we did see that the casino had a RV park that only charged $10 a day with hook ups. OK. As Maggie would say at dollar is a dollar save as many as possible. So....... We went back to our campground and cancelled the stay for the next day. Hello caching!!! 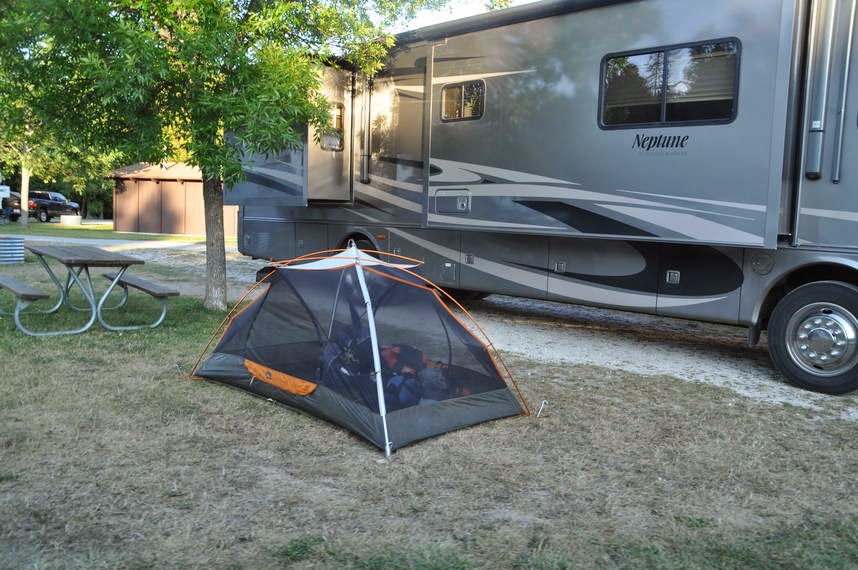 Personally I believe this was providential. You ask why??? While I was speaking with the young ranger about my refund, a bicycle rider came in and was looking for a spot to stay. The ranger told him the cost which was for a rv site since they did not have any more bike sites. I am thinking how much space can a bike rider take up. The biker really tried to convince her he did not take that much space. She did not budge. She told him he could try a campground that was 15 miles away. He told her he had already traveled over 95 miles that day. She still would not budge. So he left.  I finished our business and started back out to dinner. I told Lo what had happened. I was hoping I would see the biker. He was at the entrance of the campground looking dismayed. I told him I could not believe what had happened. We told him he could share our site. I gave him our site number and to go back and let the ranger know. I told him we would go back with him. He said no he would handle it. When we got back we looked at the space he took up. It was less than then the tent my grand kids put up in our house.

You may ask me why do I think it is providential. Well, Maggie got me involved with BSF (Bible Study Fellowship) this year. The bible book we studied was Matthew. Our main leader Diane challenged us to go back this summer and reread the book. So everyday Lo and I are reading a chapter and discussing it as we drive. Today's chapter was Matthew 25. Get your bible out. Read verse 31-46. That is why it was providential. God is good all the time.

We went to Joses Cantina since I really wanted Mexican food. Trust me this is the only Mexican restaurant in a 50 mile radius. We struck up a conversation with the guy we thought was a waiter. He actually was the owner and he told us about the other 2 places he owns down the street. One was Java Joes and the other The Garden. We saw the Garden but it was closed for dinner. Again we were told which places to see on the island tomorrow.

Question of the Day
What is the nickname of the Mackinac Bridge?
Well, until the next time Campers......