July 17. Today is move on day. We are on our way to Oklahoma. As we are getting the Hilton4 ready to leave town, we hear a siren. Lo and I look at each other and immediately go to the windows to check the weather. Looks like clear skies to us and no one is seeking shelter. We later found out it was just the weekly check to make sure the tornado warning still works. OK. You Cally folk, you know we were scared that it was the real thing. We were going to get out of Dodge before anything hit. When we asked Midwesterners about tornado threats they did not think it was anything big. They said they felt earthquakes were worse. Hello. We do not have earthquake season! I guess it is all in your perspectives. Give me a little earthquake any day.

Ladies. You know when you hear a sound in the car you have been driving for 12 years and let your hubby know and he looks at you like you are crazy. Well, I kept telling Lo the car is making a funny sound (in New Jersey). He told me it was the road. I told him again in Branson. It sounded like the brakes were wearing. He again told me it must be another car. Well, he finally heard the sound and said “I think we have a brake issue.” I just had to be quiet and roll my eyes toward heaven not to smack him.

On the way out of town we see sign that make you want to say hmmmm. One asked “is your pastor an unbeliever”. The other ask “are you being told the truth at church?” Wow. These are both questions to ponder. Maybe we all need to ask these questions for our own lives. A pastor and church won’t save us. Put and keep your eyes on Jesus.

My friend Mary Jane Tait told us we just had to stop at the Lambert’s Cafe before we left. So we did. It was a fun place to eat. It is located in the Ozarks. It is the home of the thrown rolls. You ask, what is a thrown roll? Well you but your hands up so the waiters will throw you dinner rolls to eat. At first, I was a little intimidated by this action. What if I did not catch it.  Hey, I am a Cally girl. We are afraid of very little. So I put my hand up and got thrown a roll. Yahoooo. I caught it. Of course I had to find out if the waiters pitched before coming to work here. He said a little in college. He told me his pitching techniques. Just make eye contact with the person receiving the roll and throw. If the roll is going across the room, throw the roll like a football. One of  our waiters, Josh, is a Filipino.  He had a southern accent that was most engaging. He grew up in the Philippines until age 4 and was adopted by an American family. Boy, I am feeling like my sister Nita B again.

Talk about a hillbilly menu. They had these items: hog jowls, liver & onions, slice of hog, fried catfish. The drinks came in 34 ozs only. You put molasses on the rolls.  Waiters come by with fresh fried okra, black eyed peas and fried potato. This is before your meal comes. Ribs come in a skillet. Of course you know there is very little for vegetarians. So of course you I got a grilled cheese. Even with this we were so full we almost had to be rolled out of the cafe. There isn't any silverware, place mats or napkins on the tables. You are suppose to use the brown roll of tissue (you know like the ones in the bathroom to dry your hands) as the place mat and napkin. You use your fingers as forks. For those who cannot master the finger technique there is plastic ware. Luckily for Lo and I, we grew up with southern parents so we knew what to do. Definitely worth the stop.

Next door to the café was a strip mall. I had never seen an Avon store before. I went inside to see what they had. It was like looking at a Avon catalogue.

Upon arriving in Tulsa, OK what do we see, a Hard Rock Hotel/Casino. Of course you know we had to stop to add to my Hard Rock pin collection.  Glad we did. Lo let me out and went to find a spot to park the Hilton 4. The shuttle driver told us we can park at this casino anytime we were coming through OK. They have a RV area with water and a dump station. All for free. Hey you RVers put this on your beautiful place to stay.

We arrived at Rex & Barbie’s (Norma) new OK house. We say a goodnight to each other and hit the springs. We all our tired.

Happy 9th anniversary Alex and Sharelle. Time sure has flown. You two are a great couple.

July 18. Rex & Barbie are renting a house from relatives. It is a cute home in the country. It needs work so Lo and I pitched in. Lo helped with unboxing. I started on removing wallpaper. This is what we do with family. The grand kids came over for the day. Luke and Eli are good workers. That Luke is Rex up and down. He may only be 10 but he acts and thinks better than some adults. He is always looking for ways to help. He was very patient with his 5 year old brother. Nick & Sarah are doing a great job in raising these boys.

By the way, Lo fixed the brakes. No more scrubbing. Be beautiful Red (Bren). (Yaya’s you know what that means.)

July 19. We met Rex at his new job and got a tour. He is the Director of Plant Operations. You know Rex, he knows almost everyone there already and he has been there just a month. As family, we did not want to see them leave Cally, but we think this was the best move. It has been a while since we have seen him this stress free.

We hated to say goodbye again, but we did. It was easier this time because they are both so happy. Their kids are only 45 mins and 4 hours away. We hope to see them later in the year.

Now you know you are in small town America when the stop light and stop sign are both on a little pole in the middle of the street. 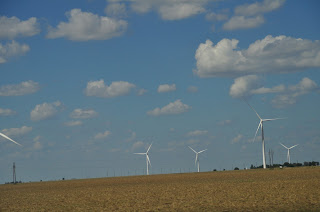 I had to stop and take a second look at the windmills. It really reminded me of home. Where is Don Quixote when you need him.

The clouds appear brighter than what we see at. Don’t let those clouds fool you. They are what keep the humidity going. They also can turn into storm clouds in a matter minutes.

We drove on to Saline, Kansas to our favorite hotel for the night.

July 20. It is Sabbath. What a glorious sunny day. Those clouds are out again. I can’t be fooled any longer. As we come to Colorado the sky gets dark again. Luckily the rain stays to the east of us.

OMG! OMG! I-70 was shut down for the entire weekend to put up a new ramp. (We found this out on the internet later.) What a nightmare. We out of towners had to clue as to what was going on. There were a couple of signs stating a detour. So we figured they would reroute the freeway and get us back. The reroute pretty much left us on our own to figure how to get back to I-70. Thank God for the Atlas we live by while traveling. Of course I had to be driving. The reroute was on I-25 which took us right in front of the Denver Bronco stadium which had country western singer Kenny Chesney concert going on tonight. (My Ya Ya sister Mary Ann probably already saw the show. Lucky you.) So traffic creeped along. Lo figured out how to get us back to I-70. We went through good, bad and ugly neighborhoods. But we finally made it back. We found a really upscaled WalMart in the Denver hills and called it done for the day. An unusual cloud came by at the end of the day. I hope it is not a storm cloud.

Well campers, we are on to the Arches National Park for the week.