Update to May 31. We went to a veggie/vegan restaurant called Ruby’s. The owner of the restaurant won the Vegetarian Time “Reader’s Choice Award” for best food. So we decided to try the food. Now ya’ll know how picky I am about food.  I looked over the menu and knew I was in trouble. They had 8 types of rice, lasagna, curry, etc. Lo ordered the lasagna and soup.

Well I know I had to protect my colon after being in the hospital last year. Sooo, I decided to just have the chicken nuggets. The owners decided that I should try the soup so she sent me a complimentary bowl. Ya’ll know I only eat Campbell’s (just only Campbell’s) chicken noodle soup. (I pick the chicken out). I looked at it and thought how do I say no politely. Well, I looked at Lo and he said, just try a spoonful. I did and it wasn’t bad. I ate ½ the bowl and I was done. It tasted like beef and barley soup and potatoes. (Ya’ll know I don’t like potatoes.) After a while we were the only people in the restaurant so (I did my Nita Balousek thing) and started talking to the waiter. Found out he was the husband to the owner. I asked him why the restaurant was not open on Saturday and Sundays. He explained that they were 7th Day Adventist. We smiled and told him we were to. His name was Mr. Peter. He went and got his wife, Ms. Ruby. We chatted for a while and we told them we had planned to be at church. They promised to see us there.


June 1 – Skagway - We decided to drive to Skagway for the day. Boy what an adventure. The weather was sunny and the scenery was just like on the postcards. Big snow capped mountains. Frozen and unfrozen lakes and rivers. We arrived in Skagway and guess who was there??? The Princess & Carnival cruise ships going to Alaska. So this little town turned into 4,000+ people all trying to shop. The downtown is only 6 blocks long. And I mean 6 tiny blocks. Well, Lo and I have taken many cruises, so we knew how to maneuver in town. We went to all the places that gave out freebies. (i.e. the whales tale, totem pole and train charms). If we were asked if we were part of the cruise we said no just vacationing. The shops really don’t care. They just want you in the store. We wandered though all the shops. We decided to skip the brothel tour. I was not giving them $20.00 bucks to tour “upstairs rooms”. We visited the Klondike Museum, watch a short movie on the great Klondike gold rush at the Klondike Gold Rush National Park Visitor Center. Did you know the gold rush only lasted 2 years (1898 – 1900)? Did you know that Skagway was the first incorporated city in AK? We visited the White Pass & Yukon train station and saw a short video on how the train took passenger from Skagway to Whitehorse. On our trip back to Whitehorse we saw 3 Grizzly bears and one car accident. (nobody was hurt). I was taking pictures of the mountains and the lake when Lo decided he could get us closer pics. He turns off the highway onto this one way in and one way out dirt road. I am looking at him like what the ???? Did we not just see a bear a couple of miles back and you are turning on a dirt road to get closer pics???? We did get great pics but like my YaYa sister Tatiana says, “I had to go to my happy place” to not be afraid the bear would be around the next turn.  We made it back safely to the motorhome and called it a night. Well the sun did not set until 11:17 PM but we turned in early.

Question of the day – How many people really live in Skagway Well look it up and let me know your answer.


June 2 – Happy Birthday Rita T. – This is our last day in Whitehorse. We went to church in Porter Creek. It is a little burg of Whitehorse. The service was really good. We were invited by several people to stay for potluck. Remember Ms. Ruby and Mr. Peter? Well, Ms. Ruby was not feeling well so she did not come to church. However, she had Mr. Peter invite us to their home. She laid out a wonderful spread of food. (I was able to eat since she now knew how picky I am.) We got a chance to meet her 2 daughters. Antoinette owns a Caribbean restaurant right next door to her mom’s restaurant. Marva was visiting from Ontario. Hello, Marva is just as picky in food as I am so we really bonded. Ms. Ruby and Antoinette live next door to each other. We had a great time and heard many stories of Ms. Ruby and Mr. Peter’s adventures. They have lived in many places and countries. (i.e. Paris, Venezuela, Guyana, Ontario just to name a few.) She is from Trindad-Tobogo. He is from Martinique. She is 77 and he is 83. They have been married 35 years. He has 6 kids and she had 2.

We decided to drive around Whitehorse for one last look. We went to the airport and saw that in 1946 the US turned over the Canadian portion of the AK highway to Canada. Happy trails Whitehorse.

Question of the day – What does the Whitehorse airport use as their weather vane? Well look it up and let me know your answer.

Until next time Trackers. Keep a light burning for us. 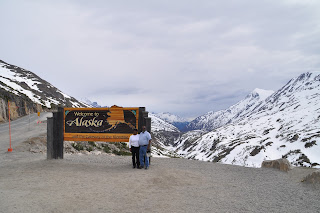 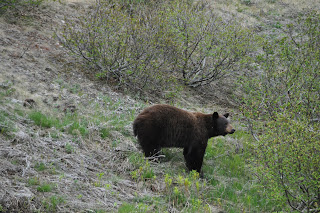