June 6 – Today is a travel day.  Before we got started, Lo decided he did not like how the right tow bar was still a little crooked. So….. He decided he would straighten it. With what you ask???? Well he used the car jack and the left tow hitch. Only he would think of this. Even the mosquitoes could not stop his quest. But it seems to satisfy him. And we were on our way. The drive was very scenic and rainy. Lots of snow on the mountains and lots of snowy rivers. We arrived in the great city of Anchorage. It was still very rainy but a beautiful day. We stopped at our favorite hotel, but there were no vacancies. However, were had our trusty maps that showed all of the state parks. So we left the Hilton 4 (our motorhome) at the hotel and went to find the best park. We found a great park. The Eagle River Park. The only bad thing is you can only state 4 days. We need to be in Anchorage for 11 days since we are going to the campmeeting. This campmeeting is a little different, as the Voice of Prophecy is helping to put it on and it is at the Egan Convention Center. Since it was so beautiful with a running river and it had a bike path that ran along the highway, we decided to stay the 4 days and play it by ear. We decided to pick our camp site. We drove around the camp site 4 times just collecting site numbers to narrow it down. I know the campers probably thought we were stalking them. As soon as we picked our camp site out, the man next to our site came to give us tips on what to do. He said not to worry he would make sure no one else got our spot while we went to go get the motorhome. His name was Jim. He so reminded us of our friend Jim Resseger that we felt right at home. (Our Jim has a lot more hair.) Of course Jim and Lo hit it off. They both love to talk. After we sat up the site, had dinner at a great Mexican cantina I decided it had been a long day and turned in. Lo stayed and talked to Jim & Kathy over the camp fire.


June 7 – Anchorage – We decided to tour the city and find out where the convention center was located. Of course we went to the Visitors Center to glean info and maps. Well we were in luck. The convention center and the visitor center are right behind each other. The center was housed in an original log cabin with grass growing on top. Did you know the same earthquake that destroyed Valdez hit Anchorage minutes later? We toured the federal building and saw a video of the destruction. It destroyed most of the buildings downtown. It took several years to rebuild due to weather. Downtown sits on a hill. It overlooks Cooks Inlet. Our friend Mary Jane told us we had to go to the Ulu Factory. Now, ya’ll know cooking is not my thing and kitchen “gadgets” well let’s just say give me a good book instead. But, we promised we would go and we did. We actually had a good time. We took time to watch fishermen on the river who seem to catch nothing. But hey, it is salmon season. We went back to our camp site and the neighbor invited us to their camp fire. Boy, the mosquitoes saw fresh meat and swarmed like a rat on cheese. Our spray was hardly working. Jim gave us a can of EcoSmart. It smelled good and kept the little buggers away. We need a case of this stuff.


Question of the day – What magnitude of an earthquake is the Alaskan Pipeline designed to with stand? Well look it up and let me know your answer.


June 8 – Lo got out early and decided to take a walk to the river. He saw where a bear had clawed a tree and decided that maybe the walk could wait and since he did not know how “fresh” passing had been. We decided to take advantage of the bike path and ride our bikes. Well, we were told that a moose and bear had been seen that morning in the area so we decided to drive the car to a few exit down and ride along the fenced area. This is good and bad. The good, the path is fenced and in front of the Army and Air Force Base. The bad, it is along the freeway with only grass between you. How bad could it be when we saw others walking, riding and running on the path. Well were are adventurous and decided to ride. I thought a good ride would be 5 miles total. The path was deceiving. It looked pretty flat. When we started up the first little stretch I thought no problem. You are just a little out of shape. I looked back and Lo was keeping right up so I thought it must just be me who was tired and kept going. We stopped at a river to check it out.  When we got to the 2.5 mile I asked him was he ready to go back. He said he could have gone back after the first ¼ mile. Now, I had to stop and look at him crazy and asked why he didn’t say something. He said, “I know you really wanted to ride today”. Lord, take me to my happy place. We finally got back to the car. Thank you Jesus. The butt is tingly. We will ride again. We decided to drive to the Alaska conference office to see where it is located. It is usually closed on Fridays but the door was opened. I went in and got a chance to meet Brenda Johnson. She is the lady I had been corresponding with when we decided to come to campmeeting. We talked about where to stay. She said some where going to stay at the church next door (Hillside SDA) and invited us stay there. We continued are drive around town. We went back to the Ulu Factory because we needed to buy our son Alex one of those “gadgets” since he loves to cook. After I found that gadget, I looked for Lo. Found him with the owner of the store, behind the counter looking at the machinery. That man loves any kind of machinery. After leaving the store we checked out the fishermen again and still nobody had caught anything. Where were those salmons?? We found another bike path and Lo had the nerve to say “maybe we should get the bikes out.” I looked at him and said “maybe we should just walk”. After some thought we walked. There was no way I was getting on that bike again that day. The path would be good for another day. We drove back to camp for a good night sleep.


June 9 – Today is Sabbath. We said goodbye to Jim & Kathy as they are leaving to return home. They just live in Eagle River and go camping every chance they get. (Usually every weekend.) We had a good time in church. Dwight Nelson from the Pioneer Church in Michigan was the speaker. His sermon was very good. It was good to see him person. I usually watch him on TV Sabbath morning before I go to our church. We packed a lunch, but were told that there was a potluck in the park. We went and the people were friendly. We met people from Florida and all over AK. There was a good musical program called The Family Reunion. There was all kind to great music. The evening meeting was with Derek Morris. I got an email from my sister Rita saying she had seen the church program and was looking for us in the audience. Sorry they did not pan us.


June 10 – We had to move the Hilton 4 today and took it to the church. We met the head deacon Steve and his wife Connie. Of course Lo found someone to talk to. Connie and I had a something in common. She is in insurance. We chatted for awhile. We were told about the Farmers Market that is downtown. It was right behind the Egan center, it really is a “flea market”. But it had lots of crafts and some good food items. They had salmon and moose cooked any way you liked it. We visited the statehood monyment. We went to the afternoon meeting about Mad about Marriage. Mike & Gayle Tucker are giving a funny seminar about marriage. Like they said it takes two to make a marriage work. Jon Henderson, from our local Oakland Grand Avenue church, gave an awesome sermon on Experiencing God’s Presence. He really brought home that we need to deal with God in some quite time. It was good to see Jon again. We got to meet Gayle Murphy Jones. She is the musician for the week. She really has a great voice and is an unbelievable piano player. We also met the host of the series George Johnson. He knows some of the youth directors we know. On our way out we met Ruth Desanto. She is from Boston. We were talking about the sun and how long it stays up. We are both looking for that “dark time”.


Question of the day – How many hours does the sun stay up in AK on June 21? Well look it up and let me know your answer. 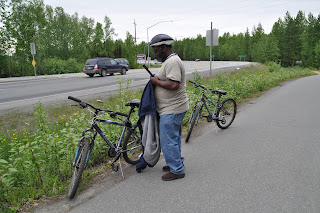 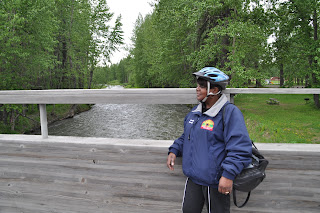 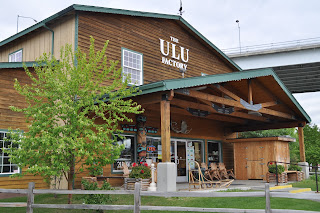 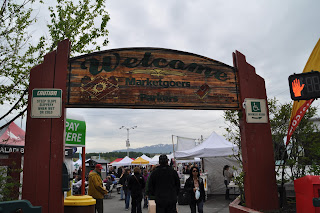 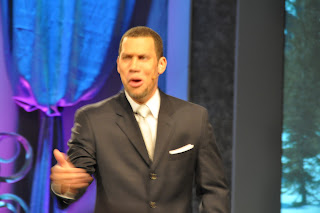 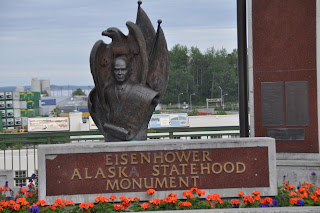 Until next time Trackers. Keep a light burning for us.

P.S. Rita your answer was correct on the Valdez question.
Posted at 12:09 PM